The Thirteenth Terry Fox Run Chennai, October 2021 Brought to you by the Rotary Club of Madras East

The THIRTEENTH Edition of the Run is here!

No Registration Fee. Only voluntary Donations accepted. All donations go to Cancer Research by approved Hospitals/ Research Establishments in India

Wherever you are! Around your neighbourhood, backyard, down the street or around the block. Walk, Ride, Run or Skate!

Click here to upload your photo or a short video as proof of your participation.

You can donate too, if you wish.

Covid-19 may have forced us to remain indoors to keep ourselves and our loved ones safe. But it cannot tie us to our chairs. Shake the bug off and run for a cause in the comfort of your safe surroundings. Participate in the Terry Fox Run, an annual non-competitive charity event conducted across 600 cities in 53 countries to raise money exclusively for cancer research. This year, the entire world can be part of this virtual event. Run, ride, walk or skate from any location you choose – on the road, a trail, treadmill, track, gym or even in your balcony. Set your own pace and do what you do best. All we need is your photo or a short video as proof of your participation and we will send you the certificate.

All you need is:

Get your medal to celebrate the indefatigable human spirit.

Terrance Stanley ‘Terry’ Fox, a Canadian athlete and cancer activist, ran to create awareness and raise funds for cancer research in 1979 with the support of the Canadian Cancer Society. He did not let his prosthetic leg come in the way of his cross-country run, the famous “Marathon of Hope”. He ran close to 42 kilometers a day through Canada’s Atlantic Provinces. After 143 days and 5,373 kilometers, he had to stop due to lung cancer.

Since then the Terry Fox run has been organized annually to celebrate human spirit and support cancer research. There is no registration fee, only voluntary donations. The Chennai Run, Ideated by Akash Dube and organised by the Rotary Club of Madras East, is also a reflection of the ideals of Terry Fox; and has contributed to the cause of Cancer Research, in our part of the globe.

A virtual Terry Fox Run: One Day, Your Way. We will unite in spirit, not in person!

Wherever you are! Around your neighbourhood, backyard, down the street or around the block. Walk, Ride, Run or Skate!

Register as an individual, family or a virtual team – start your fundraising effort!

Because cancer research cannot wait for Covid-19 to be over. Because Terry asked us to try. Because it’s the 40th anniversary of Terry’s Marathon of Hope!

Everyone is welcome to participate in The Terry Fox Run, regardless of age, athletic ability or socio-economic standing. While the run does not have a registration fee, we request participants to donate generously and also help us raise funds for the cause of cancer research. 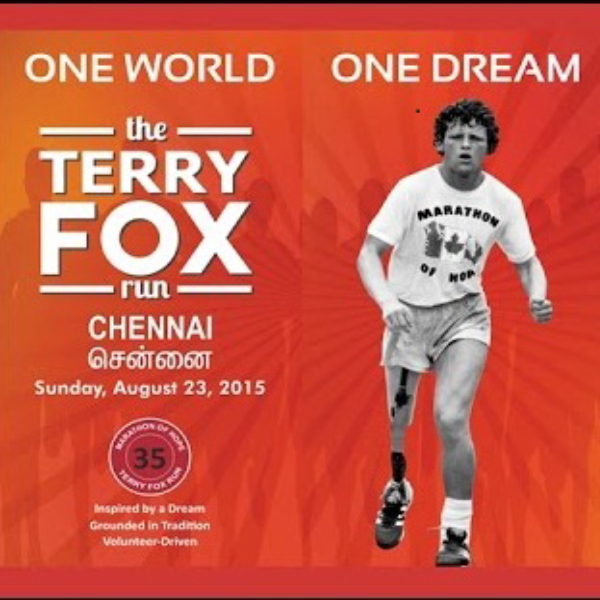 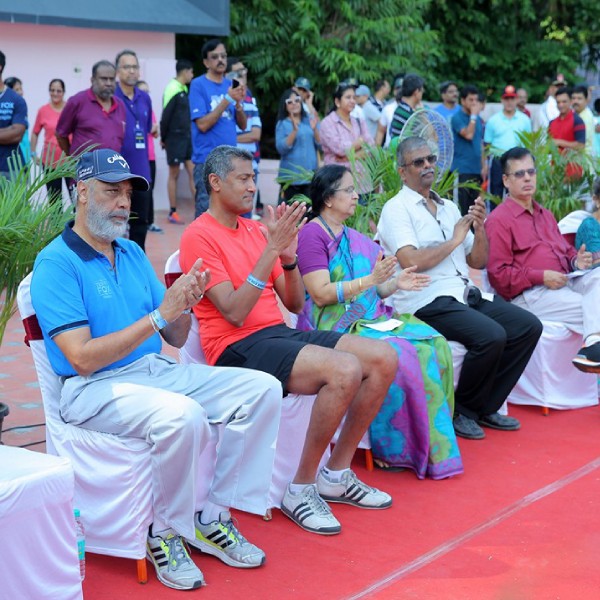 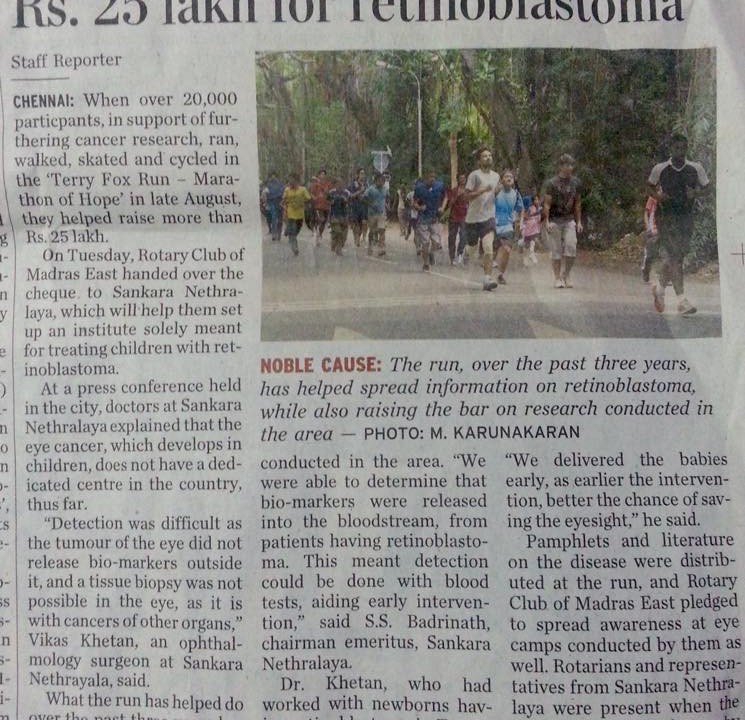 HOW IT ALL BEGAN

He became famous for the “Marathon of Hope”, a cross- Canada run to raise money for cancer research, which he himself ran with a prosthetic leg. In 1979, Terry wrote to the Canadian Cancer Society to support his run. He ran close to 42 kilometers a day through Canada’s Atlantic Provinces and after 143 days and 5,373 kilometers, Terry was forced to stop running because cancer had appeared in his lungs. Terry passed away on June 28, 1981 at the age 22, leaving a sad and stunned nation behind. (More information on www.terryfox.org)

The Terry Fox Run is an annual non-competitive charity event held over 600 cities in 53 countries to raise money exclusively for cancer research.

Another Canadian, who had lost his son to cancer, sought Terry’s approval to hold an annual run in Terry’s name and raise funds for Cancer research. The event is held every year on the second Sunday following Labour Day in Canada. Since its inception, it has raised via the ‘Terry Fox Foundation’ over C$650 million till date. The run itself is informal which means that the distance often varies, usually between 5 and 15 kilometers and participation is considered to be more important than completing the set distance. Unlike other major fund raising events, the Terry Fox Run has no corporate sponsorship. This is in accordance with Terry Fox’s original wishes of not seeking fame or fortune from his endeavor. During his cross-Canada run, he turned down every endorsement he was offered (including from major multinationals such as McDonald’s) as he felt that it would detract from his goal of creating public awareness. The Terry Fox Runs have no advertisements on any race related materials (such as t-shirts, banners, etc). Terry Fox Run Chennai, in its Tenth year, was brought to Chennai in 2009 by a teenage Akash Dube, a cancer patient, with the help of the Rotary Club of Madras East & IIT Madras. He had participated in the Terry Fox Run Dubai since a child. The last 9 runs have been an amazing success with more than 40,000 supporters participating, and many celebrities giving their support. Over INR 2.25 crores has been donated by large and small contributors that has been given to cancer research. Akash Dube fought his cancer with zest and courage, but succumbed in 2012. We, at the Rotary Club of Madras East, have taken up the baton to continue his legacy – The Run; and ensure that his spirit lives on! The Terry Fox Foundation has been highly appreciative of the immense involvement of the two lead organisations – the Rotary Club of Madras East and the IIT, Madras; and has presented Plaques to them, to laud their efforts. 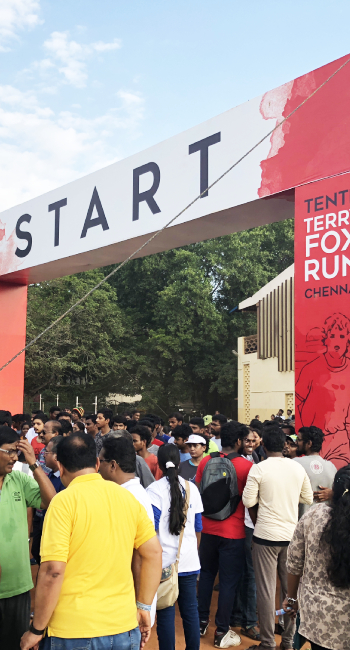 There are just a few
things that we can do very very well.

I just wish people would realize that anything is possible if you try. Dreams are made if people try. – Terry Fox

The Terry Fox Run Chennai, ideated in 2009 by a teenager Akash Dube, a cancer patient, with the help of the Rotary Club of Madras East

More than 50,000 supporters, support from many celebrities and over Rs 3 crores donated by large and small contributors - given to cancer research institutions

Send us a message